Ontario to recognize Ramadan as official holiday. 30 days off for eligible workers 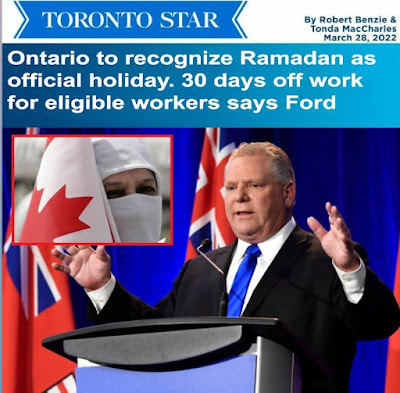 On the eve of Ramadan, the latest election ploy by the Ontario Conservatives proposes Muslim workers be granted 30 days paid leave in accordance with their faith.

"My friends, it's time for us to move past the Judeao-Christian holiday schedule and embrace the diversity that makes Ontario great" Ford said during a press conference at The Islamic Society of Toronto 'Darus Salaam' Mosque in Thorncliffe Park.

The same day, a new poll had the Conservatives with a sizeable 10 point lead with just under 3 months to go until the June 26th Ontario election.

"This year Ramadan will be extra special, as our government will officially recognize the holy month as a statutory holiday. We know the struggle our Muslim friends face during this month, not eating all day at their jobs and then having to stay up all night being force fed by aunties while visiting mosques to catch up on religious duties they neglected for the rest of the entire year" Ford continued "With this new holiday, our government will make sure no Muslim Ontarians will have to suffer the sleep depravation, bad breath, blurry eyes, low blood sugar and diabetic tendencies that we all know and love during this wonderful joyous spectacular holy month which I am obligated to only speak about in glowing terms." 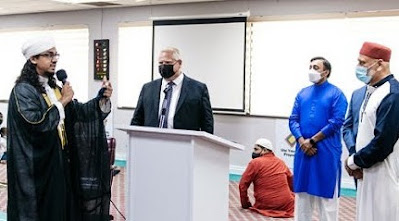 Mosque leader Aly Hindy commented on Ford's plan: "We are pleased that the premier recognized one aspect of our religion, and we thank him for that, but we continue to push Mr. Ford to recognize the multiple marriages our faith allows us which we currently have to hide from his government!!"

Noteworthy in this announcement is the fact that last election Ford lost both of the largest Muslim ridings, Flemingdon Park and Thorncliffe Park (and losing to former Premier Kathleen Wynne at that). His government has been busy in the area working with Metrolinx to hand over 50 million dollars to help build a mega mosque which will host thousands of worshippers, while only providing 130 parking spaces. Traffic studies have been promised once its too late.

The announcement drew controversy as the proposed name of this holiday would be: RamaDOUG 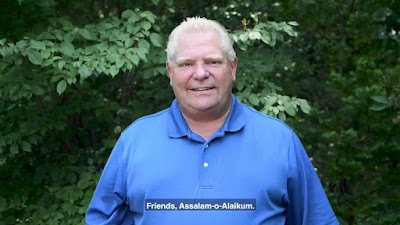 Also controversial, under Ford's new holiday workers will have to apply for work permits and undergo a circumcision inspection which human rights groups have denounced.

Ford defended his decision by saying: "Look I'll just say Assa-lame-o-lake-umm to all my Muslim brothers who are here today and the sisters who I am told are here somewhere in the back. And listen folks please don't let April fools day overshadow the joy and happiness that comes from not even swallowing your spit from sun up to sun down for a whole month to earn Gods love. Any April fools jokes about Ramadan obviously will not be tolerated!