Video of the week - Worst Birthday countdown ever!

Don't ever start a birthday cake countdown unless you know for sure that your lighter works!

Good morning everyone. I know I've stated before that this blog will be winding down so it may seem strange to start a new feature! But I figured this is the best way to keep many of you updated on some health concerns I've had recently. We've really appreciated all the prayers, cards, baskets etc. that have flowed in from so many of you. It makes me feel cared for at a time of uncertainty so thank you very much. I haven't been very public about this illness because I'm a typical male and would just rather brush it off and move on, but I felt today was a good time to make a bit of an announcement.

So for those who don't know what I'm talking about - here goes!:

Back in August I was hospitalized for a week for what is called an "Upper GI" bleed. This means part of my intestine began bleeding unexpectedly, so much so that I lost significant amounts of blood. Since being released from the hospital I have undergone a number of tests trying to figure out what is wrong. Thankfully the bleeding has not returned, but it has taken longer than I'd like to recover from the hemoglobin blood loss. One possible diagnosis is Crohns disease and another requires surgery for removal of the Ileum.

So today I'm blogging because I go for a CT scan this afternoon and thought it was an appropriate time to mention this more publicly for prayer. Please pray as I go for the scan today and in the weeks ahead when results will be compiled and decisions will be made.

Thank you for standing with us and for so many who have already been helping Hayley while I'm out of commission. More updates in the near future!
Posted by Shawn Cuthill at 10/27/2008 10:05:00 AM 2 comments:

In the car the other day Sylas discovered child-proof lids:

Email ThisBlogThis!Share to TwitterShare to FacebookShare to Pinterest
Labels: The sayings of Sylas 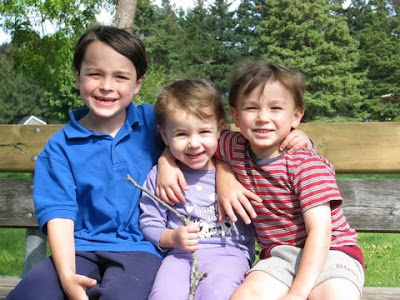 Interesting article on the benefits of religion:

Religion makes people more helpful, honest and generous but only when they think it will enhance their reputation or when they think about the possibility of a god, according to a report by psychologists.

The study draws together evidence from anthropology, economics and psychology, and its authors say it supports the notion that in early societies religion helped foster social cohesion and larger groups by encouraging cooperation.

"One reason we now have large, cooperative societies may be that some aspects of religion, such as 'outsourcing' costly social policing duties to all-powerful gods, made societies work more cooperatively in the past," said Azim Shariff, at the University of British Columbia, in Vancouver

Saw this amazing video made by a university student here in Toronto:

My dad sent me this video about the future of computers: