Today we started off with a tour of the Hindu Temple:
It turned out that today there was some festival on and so inside the temple was a guy on a drum as well as a guy with a clarinet type flute thing so it was quite loud in there along with the usual smells and bells and yells! 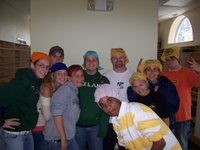 After the temple we hiked it back down to Scarborough to eat some falafel...well some of us did..others chickened out and went for the chicken fingers. This time we actually got falafel, unlike yesterday. After lunch we headed to a Sikh Temple that Neil had arranged for us. A bit disapointing to be honest...it gave me the vibe that they are like the Jehovah's Witnesses of Hinduism...a sort of branch off that is not really recognized by the mainstream and not big enough to make any impact. But anyway, it was fun to put on our "holy do-rags"! Each of us had to don a head covering before entering the temple. Some of the team liked these so much that they "forgot" to take them off upon leaving.

After the Sikh temple we fought traffic all the way down the rainy DVP to Mark & Ben's place which is right on the water front. We were hoping for a rooftop barbecue but were rained out. Instead we stayed inside and Nigel did a great session on praying for the world. We prayed for over an hour and a half for each continent and all made promises to give 5 bucks to the next missionary we saw. 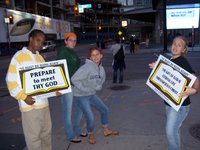 Gary Weeks came in next to lead us in some street evangelism. We ran into a number of different people and as you can see from the video we got to use all the skills with Muslims and Hindus that we had learned in the last few days. One muslim fellow took on 5 of us for a good 2 hours! I was praising God as we headed back to the cars that night. We all got in the elevator to take us down to the parking garage and all I could hear was everyone chattering about "well I told him the bible said..." and "then he said..." or "I showed him the verse about", like a swarm of bees ready to be unleahsed on the world! Please keep praying for the team as we wrap things up tomorrow with some good old door-knocking around Bridlegrove.