The events of April 23rd rocked those of us that live in the city of Toronto. A lone attacker, Alek Minassian, rented a van and drove on the sidewalk at pedestrians, southbound on a 3km stretch of Yonge Street from Finch to Shepherd Ave. Horrific scenes of bodies and emergency vehicles followed in the media for days. Our daughter was on a field trip at this intersection the week before. Far too close to home in so many ways.

As the city mourned the 10 dead and 14 injured, many continued to cry out in despair: "WHY?!". Who would do such a thing? Did he have ties to extremist groups? ISIS? Anti-women groups? What did his facebook say? Lots of questions but not many answers. While we wait for answers let me attempt to put a few of the puzzle pieces together (Autism pun intended!). This in no way is an excuse for Minassian's behaviour, or an exhaustive investigation. The Police will provide further details, however based on what has already come out this is simply an attempt to learn from the situation in order to get perspective and help those in Minassian's situation in future.

Further details may emerge but so far here is what we know:

According to Shanon Goel who attended Sixteenth Ave Public School with Minassian: "“I just remember him acting out,” she said. “He would throw fits, he would always act out, and it was hard for people to control him.”

2. In highschool Minassian was in a program for teens with special needs at Thornlea Secondary School:


a high school program for students with special needs where he would often walk the halls with his head down and hands tightly clasped, according to former classmates...making meowing sounds

3. In 2009 Minassian was part of the Helpmate program:

In 2009, Sona Minassian was quoted in a story in the Richmond Hill Liberal lamenting that her son, who suffered from a form of autism, was at risk of losing access to a special program called Helpmate that assisted the teen to “work though his cognitive barriers and prepare him for the workplace.”

One Seneca student in computer studies said Mr. Minassian had graduated from the program just last week. The student shared with The Globe and Mail a message Mr. Minassian sent to the group “out of the blue” on April 19 telling off his classmates. He added that he believed Mr. Minassian was at Seneca for seven years because he held down several software development jobs.

Few of these details are being mentioned or focused on by authorities, politicians or the media. Piecing together the special needs of someone like Minassian should be an important step in the investigation and perhaps this will eventually become the focus, however from my personal experience this is often sadly overlooked.
As we have seen from the Chazz Petrella saga, kids with Autism need routine and a different learning environment. In Patrella's case his special program was coming to an end and the fear and dread of being put back into the regular school system was too much for him to bear. Petrella eventually chose to end his own life at 12, rather than go back to the system that he didn't understand and didn't understand him.
More on Chaz here: http://www.shawncuthill.com/2015/09/parent-of-problem-child.html

Our own son Sylas (here) has had his own unique challenges with the school system. He was on the Autism spectrum but was not diagnosed by experts or teachers for the first 10 years of his life. Suspensions, children's aid, safety plans and progressive discipline all were unable to get to the root of the problem. Finally in Grade 6 a proper diagnosis by an observant principal literally saved his academic career. We thank God for her every day.

Recently Sylas was participating in an Autism study where he went for a brain scan. While talking with the nurse she commented on how kids who are "high functioning" - like Sylas, like Patrella, like Minassian i am guessing - are only just now starting to receive support in the school system and through specialized programs. She continued with a comment that I will never forget: "Older kids unfortunately didn't get this chance - the school system chewed them up and spit them out and they either ended up in jail or worse". Only now are we starting to understanding and get help for the Sylas' of the world.

What am I saying here?


More programs are needed for kids with Autism. Young kids who are misunderstood. Teenagers who are bullied. Kids who graduate out of the school system and are launched into an unforgiving, confusing, harsh world. Pray for parents who are out of options as kids age-out of special programs. Time will tell what the issues were with Alek Minassian, however my guess is he completed school and had to face a world he was very afraid of. A world he didn't understand. A world he didn't feel part of. A major issue for parents like us with Autistic children. While we grieve the loss of lives and look for a motive, let's prepare to do something if we indeed find out this is what it is.

God help us all understand these wonderfully confusing difficult challenging complex children on the Autism spectrum!

Some great reporting from Global News as they interview Bruce McIntosh of the Ontario Autism Coalition (side note, their website features the hashtag #AutismDoesntEndAtSchool which may be very relevant to the Minassian situation). Watch as he rightly explains:


Lewis said many incels self-identify as autistic. “You get a lot of people kind of embracing that identity, whether or not they’ve actually been diagnosed with autism,” she said. “It’s become this broader meme for being socially awkward and that’s yet another reason why they don’t see themselves as advantaged or privileged in society.” 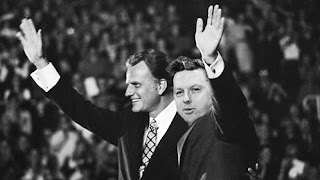 Weeks after the passing of famed American Evangelist Billy Graham, executives at the organization he founded were stunned to read of the successor Graham laid out in his will. Billy Graham Evangelistic Association President Franklin Graham announced that Toronto native Shawn Cuthill had been chosen by his father to head up the ministry.

"It was a shock to all of us" said a visibly dejected Franklin from their ministry headquarters in Asheville, North Carolina. "I've never seen this Cuthill guy wear a tie and he barely gets to church on time!" the younger Graham huffed at a hastily organized press conference. "Every day this clown either wears a Flyers jersey or a Salvation Army hat. How is he ever going to be ready to preach to millions?!"

Evangelical backlash was swift in the US, as many denounced the unorthodox Canadian choice. Cuthill is a little known Toronto pastor who can be found mainly in the inner-city rapping with gang-bangers or giving Christmas presents to Muslims. Chick-fil-A immediately pulled their support for the ministry.

"He looks more like a homeless person than a preacher!" tweeted @redstateforjesus, one of many negative tweets directed at Cuthill. "I heard he spends almost all of his time with non-Christians. He hasn't even released his birth certificate yet!" raged @trutherteaparty, creator of the hashtag #CutHELLNO which was trending #1 worldwide.


Cuthills wife Hayley though was praised by the evangelical establishment, being compared to Ruth Bell Graham and Mother Theresa. She was even born on Christmas and grew up on an island named after a Prince.

In an undated photo found attached to Grahm's will, Cuthill is seen on stage with Graham waving to thousands of onlookers. It was not immediately evident when the photo was taken as the photographer had only written the date on the back: April 1!!